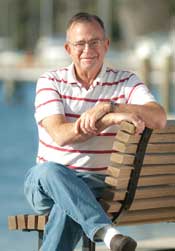 My name is James (Jim) R. Finley. I am 68 years old and live in Crestview, Florida. At about age 50 I began to notice pain in both my knees and a decrease in my mobility. My knees continued to deteriorate. This had a direct impact on my life style as I enjoyed playing golf and hiking. I tried a number of over the counter medications with little relief. In 2008 I retired and my wife and I moved to Crestview. I soon located a family physician and described the problem with my knees. She referred me to Dr. Thomas Fox who, after x-raying my knees, recommended complete knee replacement for both knees.

We decided the left knee would be first. Surgery was scheduled for 25 August 2010 and I was then scheduled for a pre-operative educational class at Twin Cities Hospital in Niceville. The presenters consisted of a registered nurse, a physical therapist, and a case manager. There were about four joint replacement candidates present and the presentation lasted approximately two hours. The class offered a basic description of my joint replacement procedure and the post-operative rehabilitation process was described. My left knee was replaced on schedule and within 24 hours after surgery the therapist had me on my feet with weight on my left knee. On 28 August I was released from the hospital and began home health care therapy. In early September I began outpatient therapy which I completed in mid October. As part of the home segment of the outpatient therapy I started playing golf again. All of these transitions came easily and I could feel I was gaining strength. By the end of November I could walk a full 9 hole golf course. I hadn’t been able to do this for 12 or 15 years.

In mid December I contacted Dr. Fox’s office and scheduled my right knee surgery for 26 January 2010. I chose to attend the pre-operative class again at Twin Cities Hospital Wellness Center. Having had the surgery and having completed rehab I thought I might have something to offer for new surgery candidates. My surgery was completed on schedule and I’m now attending outpatient rehab. I expect to be back on the golf course by the first of March.

For anyone suffering with joint pain, I strongly recommend they consider joint replacement surgery at Twin Cities Hospital. It certainly worked for me!